Courbet, a farmer's son, was born June 10, 1819, in Ornans. He went to Paris about 1840, ostensibly to study law; instead, he taught himself to paint by copying masterpieces in the Louvre, Paris. In 1850 he exhibited The Stone Breakers (1849, formerly Gemäldegalerie, Dresden, destroyed 1945), a blunt, forthright depiction of laborers repairing a road. In it, Courbet deliberately flouted the precepts of the romantics?champions of emotionally charged exoticism?and of the powerful academics?guardians of the moralizing Beaux-Arts traditions. He further outraged them with his enormous Burial at Ornans (1850, Musée d'Orsay, Paris), in which a frieze of poorly clad peasants surrounds a yawning grave. Courbet compounded his defiance of convention in another huge painting, The Artist's Studio (1855, Musée d'Orsay), which he subtitled A True Allegory Concerning Seven Years of My Artistic Life. In it, Courbet sits painting a landscape center stage, attended by a small boy, a dog, and a voluptuous female nude; at left a group of figures, potentially subjects for his paintings; at right a lively, spirited crowd of his friends admires his work. At the same time he issued a provocative manifesto detailing his social realist credo of art and life. By this time he enjoyed widespread popularity.

As radical in politics as he was in painting, Courbet was placed in charge of all art museums under the revolutionary 1871 Commune of Paris and saved the city's collections from looting mobs. Following the fall of the Commune, however, Courbet was accused of allowing the destruction of Napoleon's triumphal column in the Place Vendôme; he was imprisoned and condemned to pay for its reconstruction. He fled to Vevey, Switzerland, in 1873, where he continued to paint until his death on December 31, 1877. 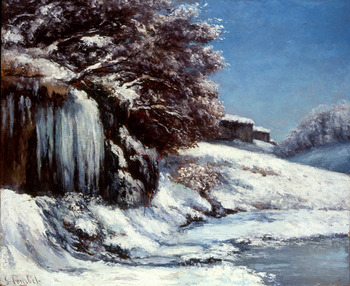 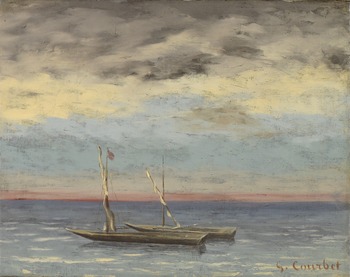 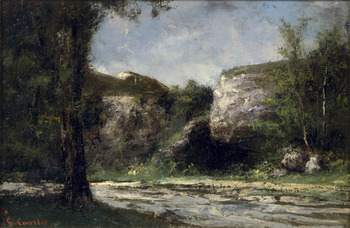 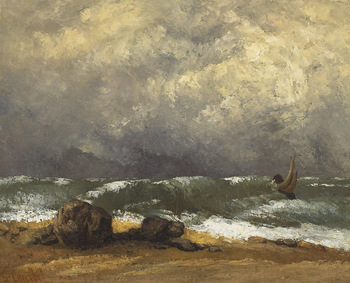 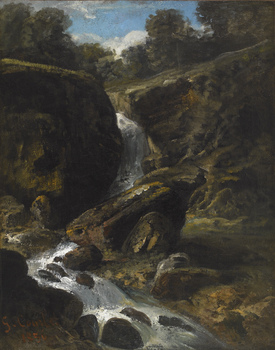 Gustave Courbet
Landscape in the Jura with a Waterfall, 1856
SOLD