Charles François Daubigny was born in Paris on February 15, 1817. His father and his uncle being painters of some reputation, Daubigny?s interest in art was encouraged from an early age. A sickly child, his parents arranged for him to live in the country in the small village of Valandmois. It was during these childhood years with the Bazots, his adopted family and lifelong friends, that Daubigny?s love of the rural landscape began. Daubigny?s earliest artistic experiences included the decoration of boxes and clocks and, at the age of 17, restoring paintings at the Louvre under the direction of Granet. His training was largely informal; his studies in the well-respected atelier of Sentie were interrupted by a year-long painting sojourn in Italy with his friend Henri Mignan. In 1840, he spent a brief period under the tutelage of the academician Paul Delaroche.

His earliest successes, as well as a means of financial support, were his etchings and illustrations. After winning his first Salon prize in 1848, the French government commissioned an etching from him after Claude Lorrain?s Abreuvoir. Daubigny?s first love however, was landscape painting and his fascination with water was evident judging from his Salon entries of the late 40?s and 50?s. Known for his spontaneity and broad painterly brushstroke, his work was often criticized for its sketchy quality. In the Montier Universel, a popular daily, the critic, Grunn, wrote on June 20, 1852, ?Is M. Daubigny afraid of ruining his work by finishing it? . . . I have a better opinion of his talent and I am convinced that a man who has begun so well could not finish badly.?

Daubigny, unlike many of his contemporaries with whom he is closely associated due to their mutual concern with the study of nature, spent little time in the region of Barbizon. He traveled extensively in France, as well as to Spain and England. In 1852, Daubigny met Corot, and a long and enduring friendship, which included many painting excursions together throughout France and Switzerland, began. The painter was most drawn, however, to the landscape of Valandmois, the place of his childhood and the countryside of Auvers, where the artist would eventually make his home.

It was Auvers in 1857 that Daubigny launched his studio boat, the Botin, from which he would produce his memorable and popular paintings of the Oise. From this time, a difference could be seen in Daubigny?s work. His ability to capture the simple beauty of the countryside was unchanged, but his brushstroke became shorter and more confident. Though his work had finally found popular acceptance, criticism did not cease. In 1861, Daubigny?s unique style of painting would be assaulted by Gautier, who accused him of painting only an ?impression.?

Daubigny?s position as a respected painter and prominent member of the artistic community was clearly recognized when in 1865, he was elected a member of the Salon jury. In this role, he was one of the few who recognized the talents of a new generation of younger artists, and his influence was key in the Salon acceptance of works by Pisarro, Monet, Sisley, Degas.

Daubigny died on February 19, 1878, and according to his wishes, was buried next to his friend Corot at the Cemetery of Pere Lachais. 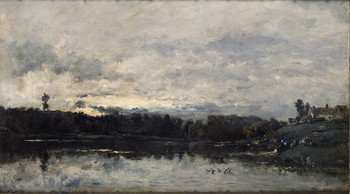 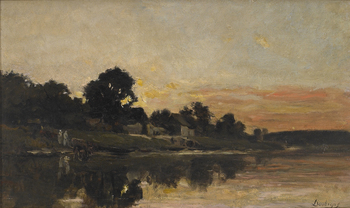 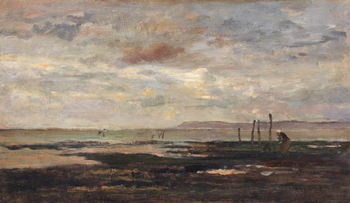 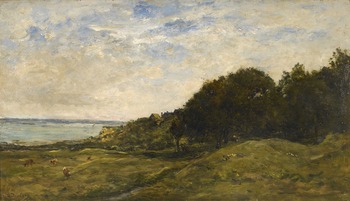 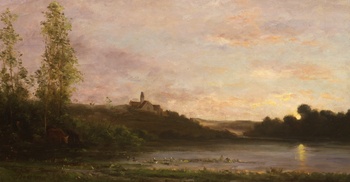 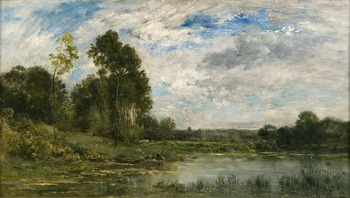 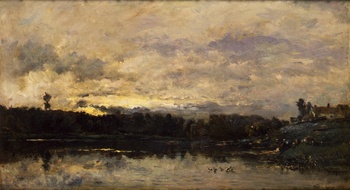 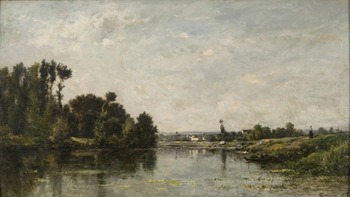 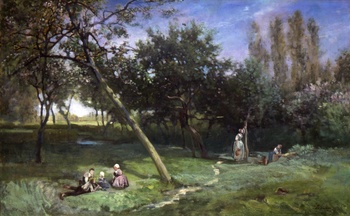 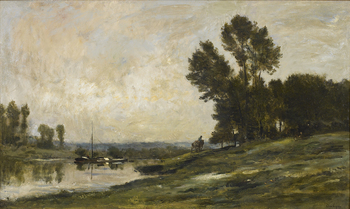