One of the most highly recognized American expatriate painters of the nineteenth century, Daniel Ridgway Knight was a painter par excellence of the French rural peasant. He and his wife moved permanently to France in 1871, settling in the countryside first in Poissy, and then to a home and garden overlooking the Seine in Rolleboise. Either painting en plein air, or from a glass studio that allowed him to capture natural lighting conditions, he completed his scenes of the young women of the French countryside. While his preferred subject recalled such painters of rural peasants as Millet and Breton, Ridgway Knight exchanged the pensive, melancholy quality of these artists for a cheerful and tender benevolence that sets him apart from his French contemporaries. 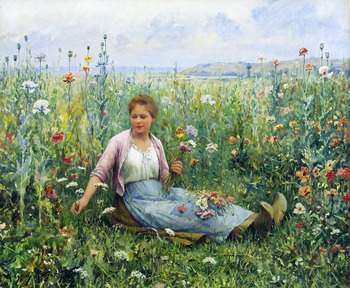